The late 1970s were a long time ago and it is sometimes a bit difficult to remember exactly what happened. My original proposal for an exhibition about PA Yeomans at the Art Gallery of NSW in 1976(?) seems so lost in the mists of time it’s hard to get much together about it. Maybe it’s because there are so many of these “projects that didn’t happen” in my life, or at least didn’t happen completely or didn’t happen in their desired form, that I have a bit of a thing about them. All too often the projects that didn’t happen are the really important ones, the ones that shape your thinking and lead you on to the next important thing and that is certainly true of my Yeomans exhibition proposal.

In fact I think Lucas probably came to know about it because we discussed it as part of a group of prints I wanted to do with Big Fag Press called “What Didn’t Happen” and I was suggesting that Big Fag should take this on as an ongoing series inviting other artists also to make prints about their favourite projects that didn’t happen.

One of the underlying aspects of this current project, but only one of several, is a bit of discussion about my original AGNSW project and its implications in the development of conceptual art in Australia. It’s easily answered, there were no implications because it never happened, only myself and a couple of curators at AGNSW were aware of it. Nonetheless it was an important step in my thinking.

Lucas and I have discussed what it was meant to be like and even though my original files have been lost or discarded there are a few fragments, so trivial that they obviously weren’t even filed, just tossed into my boxes of sketches and rough notes and so they have survived. It’s hard to even date exactly. All that is certain is that I was working on it when I was in retreat from the Sydney madness of post green ban violence and anti-prison movement stress, it was one of my two major projects at the time. Although I visited Sydney nearly every week, I was living at Napoleon Reef, just east of Bathurst, from late 1974 until 1977.  In late 1977 I broke my knee and wrist during anti-uranium shipment demonstrations at White Bay container terminal so I had to remain in Sydney because I was in plaster from hip to ankle for six months. From then on I lived in Sydney for the next twenty years or more.

The remaining fragments are some notes about the exhibition which are quite possibly the earliest notes, some pamphlets about Yeomans’ ploughs, a copy of a proposal by Yeomans for the design of a new city at Monarto in South Australia on Keyline principles, a letter dated September 1975 from Jeff Moss who was writing about Yeomans and a very early draft of an essay that seems to relate to the exhibition although I’m not certain because every time I start to read it I cringe in embarrassment so much that I soon give up on it.

Here are the notes. 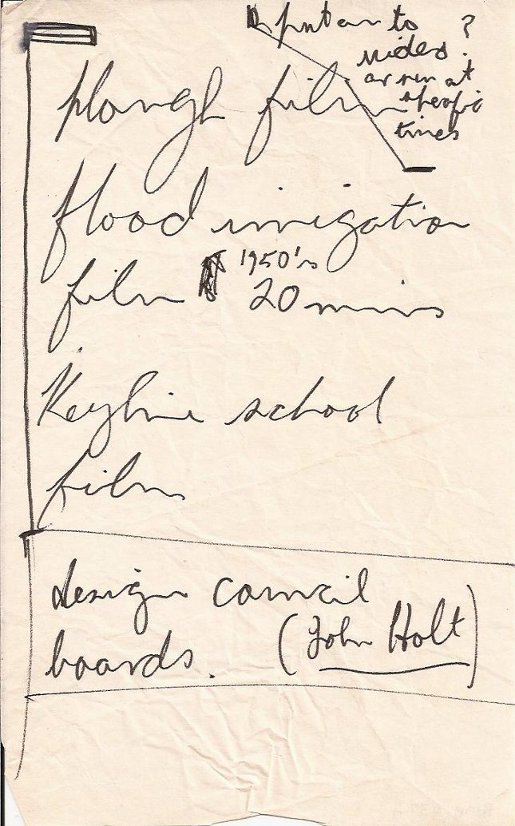 I think that makes it clear the exhibition which was to be part of the AGNSW project series in the contemporary project space was to have some of Yeomans’ equipment – ploughs, lockpipe valves for dams, water levels, irrigation flags – and films and videos of his farms as well as “photo maps analysis video” explaining how the farms worked, in particular Yobarnie and his Orange property. There is even mention of Len Peel, presumably the brother of Bob Peel who we met briefly on our visit to Nevellan.

Apart from the fact that maps and photos had become pretty common in performance documentation there was not much about this that shouted “art” so you can see why the AGNSW Trustees might have been a bit puzzled by it. Although it was an exhibition curated by an artist it was almost aggressively lacking in art, it was unashamedly about an agriculturalist with controversial views on the future of farming. It wasn’t even an act of Duchampian appropriation, in fact it was the exact opposite if you thought about it a bit.

What the hell was it doing in the AGNSW? And we only have three months to work it out!

One response to “Time Team”