In his last post, Ian mentioned a “fourth print”, based on Professor Stuart Hill’s research into PA Yeomans. Of all the Yeomans prints we’ve produced on the Big Fag Press, it’s the one which most resembles a highschool project (which is also why it’s the most daggy). Aesthetics aside, I’m going to try and make sense of some of the Stuart’s ideas which this poster grapples to exhibit.

I sketched up this diagram after having a chat with Stuart in a meeting room within Wollongong University Library, and then delving into a bunch of his academic texts – some of which are available via his own website. Stuart is Foundation Chair of Social Ecology at the University of Western Sydney.


Social Ecology is a way of applying ecological understanding to the design and management of human systems.

In other words, it’s a field of study and action which attempts to wholistically combine ecological, economic, and social spheres in order to design better systems for the planet. As Murray Bookchin, one of the pioneers of the field pointed out in 1964, people who want to “save the environment” had better, first of all, put some effort into understanding the way that humans think and work. Bookchin writes:

To separate ecological problems from social problems–or even to play down or give token recognition to this crucial relationship– would be to grossly misconstrue the sources of the growing environmental crisis. The way human beings deal with each other as social beings is crucial to addressing the ecological crisis. Unless we clearly recognize this, we will surely fail to see that the hierarchical mentality and class relationships that so thoroughly permeate society give rise to the very idea of dominating the natural world.

Here’s another interesting attempt at a definition, from the School of Social Ecology at the University of California:

A modern definition of social ecology understands it as the interactions within the social, institutional, and cultural contexts of people-environment relations that make up well-being […] At its core, Social Ecology’s motivating philosophy is a pragmatic one — the most persistent ills of society (sprawl, malnutrition, deforestation, urban violence, waterborne disease, obesity, housing insecurity, and countless others) seem to resist the prescriptions emerging from uni-disciplinary research.

When we met up, Stuart and I talked about dozens of different things: from psychological analysis of “the self” and its relation to “the world”, to more concrete stories about co-existing with weeds on productive farmland. In my diagram, I’ve focused on just one element of our conversation – the notion of “redesign”. 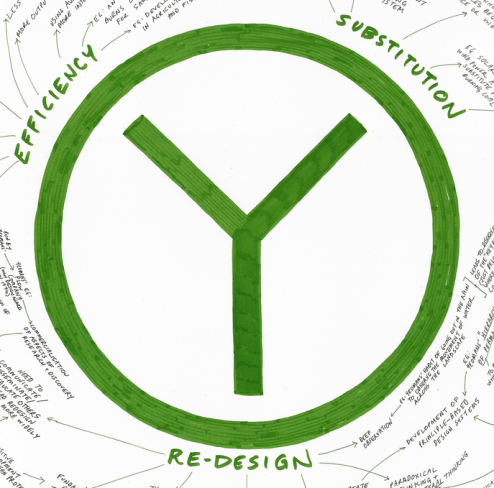 In Stuart’s account, the desire to improve the way particular systems work usually happens in one of two ways: by increasing efficiency, or via the substitution of different inputs. These two approaches can be thought of as incremental steps towards the more wholistic (but more difficult) process of redesign.

Here’s a simplification of the EFFICIENCY-SUBSTUTITION-REDESIGN (ESR) concept: 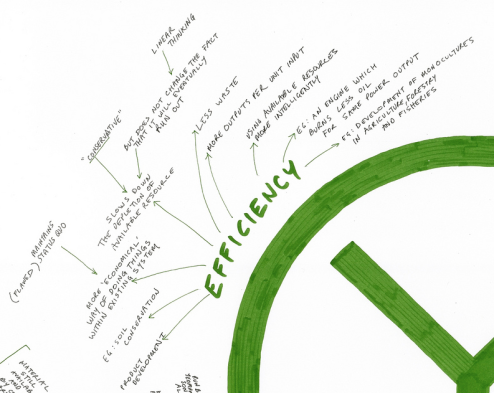 Efficiency: this is about using available resources in a manner which is likely to generate more yield.

For example, a more efficient motor will propel your car further for the same amount of fuel. There’s often an economic imperative for product manufacturers to improve the efficiency of their own systems, as it can yield more profit (or be more attractive to consumers).

My 2011 Hyundai is far more efficient than my old 1978 Ford Transit Van ever was, meaning it’s not only cheaper for me to drive, but it also produces less pollution per kilometre travelled. That’s great, but it still only reduces (but doesn’t do away with) the basic underlying problem – that car travel is a polluting activity. With the number of cars on the road increasing all the time, this efficiency gain is outweighed by the sheer volume of drivers – and so carbon emissions continue to rise.

To use a different example (and perhaps a more silly one) – the amount of fuel used to freight rolls of toilet paper from factories to supermarkets can be improved by making each roll more “efficient” – ie, by decreasing the size of the cylinder of air in the middle of the roll, and making up the difference by having more sheets of toilet paper per roll. But this still doesn’t alter the fundamental problem of all that human shit being flushed down the toilet – the existing system remains unchanged. 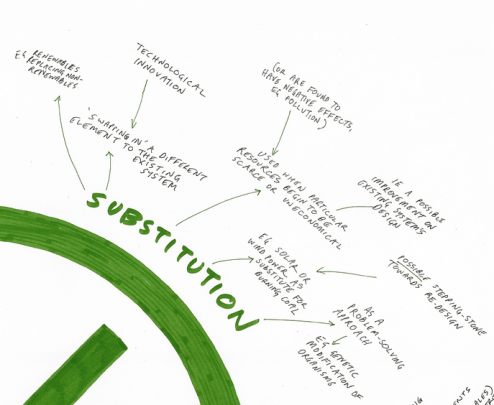 Substitution: here, an attempt is made to go beyond efficiency, by substituting a different kind of input material.

Unleaded petrol is less poisonous than the old “super”, and using bio-diesel from vegetable oil means that you can potentially run your car using a renewable resource, rather than oil.

Similarly, the widespread acceptance of recycled paper for toilet roll manufacturing means that fewer trees need to be chopped down for us to wipe our arses. But again, substitution is a way of patching up – and possibly even scaffolding – an existing, flawed, way of doing things.

The approach of redesign involves taking a step back from the situation, and reframing it more broadly. What exactly do we want to do here?

The way things are currently set up, humans want to rapidly move their bodies, as well as manufactured goods, from place to place. We happen to find motorised road travel a convenient way to carry out this function right now, but it’s not the only way to achieve this goal.

To zoom back even further, we could ask – why do we need to move our bodies about so much anyway? Is there some way we could redesign human systems so that we don’t require this level of physical mobility? Experiments in the “relocalisation” of society are part of the process of redesigning this problem.

And what of my toilet paper example? Nick and Kirsten of Milkwood Permaculture loves talking about this sort of shit. To paraphrase their redesign of the problem:

The dumb thing about our current way of organising sewerage systems is that we take two substances – human poo and fresh drinking water – and we mix them together to make a third substance which is not useful for anything. We then flush it away, and have to spend vast amounts of energy treating it, to make it safe again. But if we were to look at human excrement as a resource instead of a pollutant, we could then think about harvesting it and breaking it down (eg via a “humanure” composting system) to make an excellent agricultural fertiliser.

And where does Yeomans come in all of this? Interestingly, Stuart Hill discusses the work of PA Yeomans extensively in his explanation of the EFFICIENCY-SUBSTITUION-REDESIGN concept. The poster we’ve made tries to accumulate a whole bunch of anecdotes and ideas about redesign stemming from Yeomans’ work. For Hill, Yeomans’ approach to landscape and farm management is an excellent example of redesign.

Farming is often thought of in economic terms – how can we get the best yield for the least input? In the 1960s, chemical fertiliser and pest control became cheap enough to make agricultural food production a global industrial process. But in an environment like Australia, with its poor soils and drought-prone climate, an industrial approach like this can lead to diminishing returns – not to mention to the degradation of the very resource (the land) upon which the whole enterprise relies. 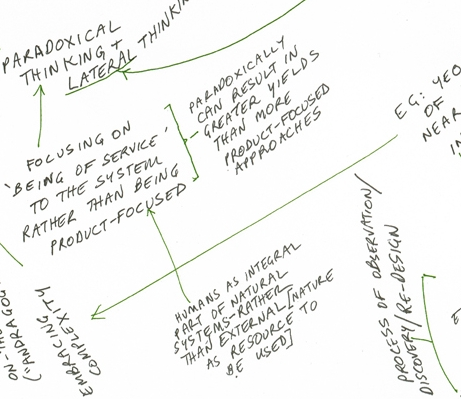 The question itself then changes. Rather than wondering how to preserve the precious little soil we have, Yeomans asks: “how we can create an abundance of new soil?” Rather than asking “how can I extract more product from this harsh climate?”, he asks “how can we improve the climate of the soil for the life within it?”.

Having thus reframed the problem, Yeomans then set about to develop a whole range of interlinked approaches (beginning from the close observation of land shape and water flows) to “improve the capital” in the system itself. The idea is then to live off the interest, rather than depleting the capital.

Those who are inclined to poo-poo this “organic farming” approach might say that it’s not workable on a large scale; that it’s merely a “boutique” method and cannot feed the earth’s billions. Arguably, such critics aren’t taking into account the fact that conventional farming has a whole host of unaccounted-for inputs (unrenewable energy, chemical fertilisers) and outputs (carbon emissions, long distance freight) which prop it up. In other words, the apparently high yields of conventional agriculture come at a cost which has, up to now, been bracketed out of the equation.

A social ecology approach not only generates ideas for redesigning human-environmental systems, but also explores why good ideas may have failed to gain wider acceptance. In his own lifetime, Yeomans’ Keyline design system, for example, never became the “human environment revolution” that he’d hoped for.

Stuart Hill hypothesises that a combination of elements may have contributed to this limited uptake during his active Keyline years (roughly 1950-80). These include:

Yeomans is often described as a “pioneer” of sustainable agriculture. Perhaps, as the cliche goes, he was simply ahead of his time. These days, he’s often cited as an influence on permaculture movement, which has risen dramatically since the 1970s, and begun to infiltrate mainstream thinking.

In permaculture teaching, Yeomans’ Keyline design methods are just as likely to be used as a metaphor for a particular approach to problem setting and solving in a wide range of circumstances (ie, not only for farming and land management). And it’s this “integrative thinking” – the ability to bring experiences from diverse fields onto a problem situation – that makes Yeomans an important contributor to social ecology research.

One response to “PA Yeomans and Social Ecology”